…..It doesn’t matter what you call it – it’s a sport for pet dogs, based on real life bomb, drug or contraband detection.

What are the dogs searching for, if it’s not bombs or drugs? 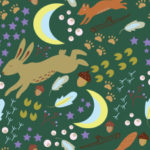 How to do the “Running Bunny” in Nosework

In the sport of nosework (or scent detection) dogs search for a target odor that has been secretly placed in each of the four
‘elements’.  Dogs must learn to search containers (like boxes or suitcases), interior spaces, exterior spaces and vehicles.  In a nosework trial, dogs can be asked to search any kind of vehicle. 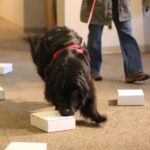 Recently I had a friend over to do some nosework. She has two dogs. I have two dogs. Three out of four dogs failed the
container search because they alerted on a distraction instead of the target odor. What was so irresistible? Pancakes!